INFORMATION ON THE TRIAL OF PROPHET KACOU PHILIPPE 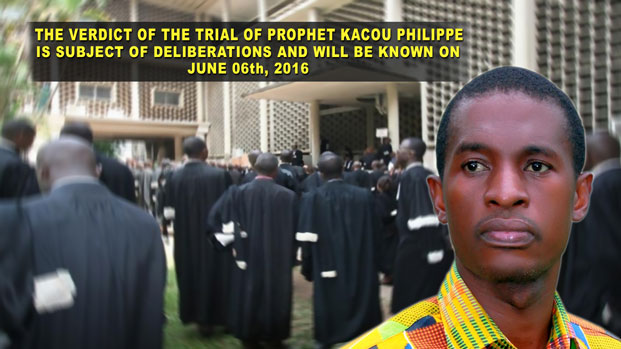 INFORMATION ON THE TRIAL OF PROPHET KACOU PHILIPPE

It's over for this Friday, June 3rd at the Court of first instance of Abidjan. Prophet Kacou Philippe was opposed to the public ministry, represented by a prosecutor. There was also a lawyer and both of them with the judge. Prophet Kacou Philippe had no lawyer. The prosecutor requested a 10 year-sentence. But the judge has submitted it to some deliberating for June 6th. They will decide together this Monday. After the trial, we went to give some water to the Prophet where he was detained, at the tribunal. He told us, with a laugh : "I was a bit awkward there because it was the first time I went to a trial and this was my own. I didn't know who was the judge, who was the lawyer, who was the prosecutor ".

Then we were leaving him, he said : "Avoid provocations. Even without me, you must go forward and save souls."
At the bar, it was the same Prophet Kacou Philippe that you know.