CLARIFICATION ON MY PRIVATE LIFE 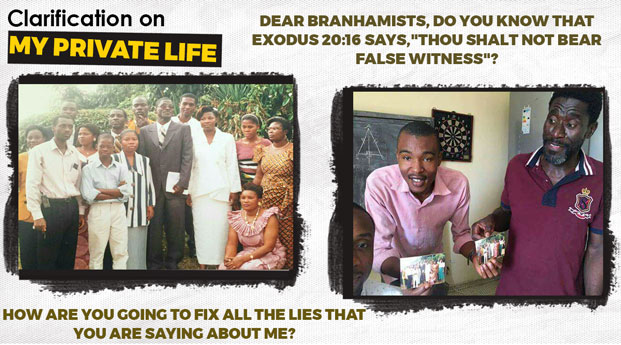 CLARIFICATION ON MY PRIVATE LIFE
Dear Branhamists, do you know that Exodus 20:16 says,"Thou shalt not bear false witness"?How are you going to fix all the lies that you are saying about me? You do not believe in me because I am alive, if not you cannot convince me of sin. I want to talk about what happened and if the fact of talking about it is bad, may God forgive me. The truth before God is that, in 1997, I proposed to the older sister of the one in white on the picture. But I never endowed her or slept with her. After a year of engagement, I asked for the break-up because during the engagement period, she had sex with a young student, a Jehovah witness, and according to what the young man told me when he was asking me for forgiveness in her presence, I decided to break off the engagement. And despite the interventions of her father and Pastor David, I did not accept. The family of the Sister was belonged to the church and I had nothing, I was nothing but her father liked me. He had asked Pastor David to intervene. And when I didn't accept, the father cried. And at a meeting, Pastor David in his office, in my presence and in the presence of the Sister, and before the elders, had pronounced the break-up of our engagement. I don't remember if the sister's parents were there. So it was over. But they all hoped that one day I would change my mind.

WHY WAS I DELIVERED TO SATAN:
Even though the engagement was broken, Pastor David wanted me to go back with the Sister, otherwise I would not be allowed to propose to another Sister. Later in 2000, I secretly proposed to a Sister who had believed through my channel and who was working with me. I told this Sister about marriage and she accepted and I informed my parents. And my parents approached her parents and she got endowed. And I informed Pastor David who refused to accept our union. And later the parents of the Sister called my parents to come and take the Sister according to their custom. Since she has been endowed, she can no longer stay at their place. And I didn't know what to do for the blessing, and the Sister suggested to me that her former pastor should bless our union. And I was obliged to accept. And it was done. And we lived together in my house before I approached her for the first time. And even in the same week, I informed Pastor David, he delivered me and the Sister to Satan. And a month later, he called me back and told me that I could come to church with the Sister. And I went to church with the Sister. Everything was going very well. And later, in March 2002, I had a visitation telling me that the time for my ministry had come. And I went and told Pastor David that I would no longer be coming to church. I left them peacefully. But my wife continued with them. And I was no longer going to church, but I would go and greet Pastor David at his place. But one day, at the funeral service of a brother named Kouadio Guy, who was good to me, I went to church there but several of them refused to shake my hand or respond to my greeting. I was not welcome. And that's how I cut all ties with them.

THE PICTURE BELOW:
This photo was taken at Felix Ampoh's wedding, the one in the suit, with his fiancée in white on his left hand side. It was around 1998. I do not take interest in people's private life, but I am surprised to see him brandish my picture. He was a preacher, a Sunday school teacher, but he had impregnated his fiancée before the wedding and he dares to attack me too. May God forgive me for what I am about to say, but as the bride is standing there on the photo, she is pregnant and she is in white as if she was a virgin. I had been delivered to Satan for no reason, but he had not been delivered to Satan, and he continued to teach at Sunday schools. I leave them with their conscience. And I say thank you to God because I was victorious in their church which was a true pigsty of sin where the holy supper was organized every end of the month to ease their conscience.

INTERPELLATION:
I, Kacou Philippe, you dare call me a pervert? I who was thought to be impotent by my parents? All my younger brothers had children and I didn't know any woman. I'm a pervert? Is it by revelation that you say it? Alright, I consider that it is God who has revealed this to you, but know that it is not because of my pure life that I am a prophet, but it is because of the Message that I received on April 24,1993, and it is because of this Message that thousands of people around the world believe in me. If you believe that if you were in Israel, you would have said "AMEN" to David killing Urijah and taking Bathsheba, you would know that a prophet, it is not his life but his Message! A bad tree cannot produce good fruit. At the beginning of this new year, that's what I'm giving you. Whatever you say or whoever you are, I Kacou Philippe, I am your prophet with whom you lived on earth.