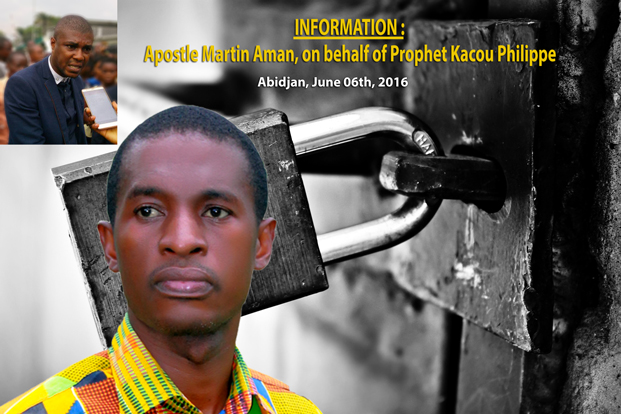 Prophet Kacou Philippe was arrested by the national intelligence services of Ivory Coast on Friday, May 13, 2016. Behind this arrest: the evangelical churches of Ivory Coast. Instead of organising a live debate or confrontation, a purely religious matter is taken to court. And the Prophet is accused of : challenging the public authority, of incitement of religious hatred and religious radicalism. He spent 5 days at the brigade of the intelligence services. From there, he was transferred to the DITT ( cyber crime police), another branch of the police. After the questionings, in the night of May 18th, 2016, he was transferred to basement of the headquarters of the police in Plateau where he spends the most difficult nights of his life. On Friday, May 20th he is transferred to the prosecutor's office, he is placed under a detention warrant and transferred to the largest prison of Abidjan with one charge : "incitement to religious hatred". On Friday, June 3rd, he appears before the court of first instance of Abidjan. With the judge and the prosecutor of the Republic, the churches had two lawyers. The Prophet was alone but read the report of the journalists and you will know. And the prosecutor of the Republic condemned the Prophet to a 10 year-in-jail sentence because the Prophet says he is the only true Prophet of God on earth and that a woman does not have the right to preach in a church. At the announcement of the 10 year-sentence, some members of the evangelical churches were dancing in front of the tribunal, insulting the Prophet who was handcuffed. At least, they all agree that Prophet Kacou Philippe himself did nothing wrong but it is because of his believers. But the judge took the verdict under deliberation for Monday, June 6th, 2016 ( A first for a trial of flagrant misdemeanours). On Monday, June 6th, the Prophet is condemned to 1 year in prison and 5 years of deprivation of his rights in fulfillment of the Scriptures that say : " You will be hated and you will be dragged before the tribunals for my name's sake ". And yet, in Ivory Coast, in 20 days of detention, 42 people have believed in him and have been baptised.
Let's note that the Message of Prophet Kacou Philippe has more that 20 churches in some countries like Congo Kinshasa and Angola. More that 10 churches in Cameroon, Gabon, Brasil... On the day of the trial, there is were gatherings in front of the ambassies of several countries of the world. Below, the pictures of the crowd that came to attend his trial.