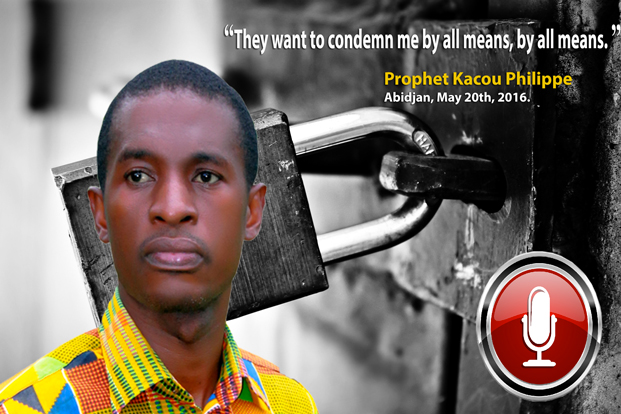 (TRANSCRIPT OF THE AUDIO)

Brethren, first, at the level of the national intelligence services, I was accused of:

And for these different points, I explained clearly and they understood. They wanted to release me when the cyber crime police said they wanted to talk with me. The lieutenant who received me at the national intelligence services, Lieutenant Ouattara even said that, some day, he will organise a seminar and all the personnel would come to hear what I would say. He had realised that everything people say about me are just lies. And Lieutenant Ouattara took me in his car and drove me to cyber crime police. He even told me that they would release me. But Brethren, when I arrived at the cyber crime police station, the police officer who was questioning me, Officer Dezaï, as soon as we started, he started asking me questions. He was supposed to asked me question on technology but he was asking me question about my Book, about my Message. He asked: “What does your Message says?”… Now, when I gave the answers, he would not put the answers correctly. I take an example. He asked me: “What does your Message say?” I said: “My Message says that the State is not above the Church but as citizens, every christian must comply with official obligations and as an evidence, I have my ID card.” He only wrote: “The State is not above the Church”. And he stopped there. I told him to put the rest. He said : “No, it’s enough.” And he told me to go to the next point. That’s the way we went on with all the other points. It was really difficult. But we continued thus. He wanted to modify everything I said. And I say for example the my Message says that catholic, protestant, evangelical churches and all mosques are nets of Satan, he would write all of this in capital letters. It was in such a spirit that he was doing the questioning and the senior officer who gave him the task arrived. When the senior officer examined his work, he got angry. The senior officer shouted at him. The senior officer said: “But he is free to believe what he wants. If he believes that his church is the best and so on, he is free to believe what he wants. It was not for this that we asked you to do the questioning.” And he was confused. And the senior officer said: “but if you want to know about his Message and other, you can listen to him later.” And then, Brethren, it went on this way and the senior officer replaced him by another one. I don’t remember his name. Now, when this other came, he asked me out of the office first. And then I went out of the office but I remained close to it. The two of them were having a conversation there and I could hear them compare me to Jihadists and so on. And when they called me, I reply that :”I won’t”. I remained where I was for an hour. Both of them started asking me for forgiveness. And they kept in this sense, asking me for forgiveness until I said: “well, understood.” And they then went to write the answers. And when they brought me the report, I was correcting while reading. But in the end, I said: “I won’t sign it.”  And he wrote on the report: “Refusal to sign” or something. He wrote something like that. And in that moment, Apostle Martin was now in the room. And he took the handcuffs and he was there. I don’t know whether he wanted to handcuff me. And he was there till I said: “well”… For example for the caricatures, he did not ask me how it happened for those caricatures to be posted.  It was that woman who attacked me first. And some people whom I consider to be my believers also replied with caricatures. I have the caricatures. I have the caricatures that they made on me too. I have them. But the officer was doing things in a whole other spirit. They want to condemn me by all means, by all means. They are seeking ways to condemn me. You see? And it was done and they sent me here. That’s a bit what happened.

And there are some other points like, for example, they would refuse everything I wrote. Because, in a police interview, if I say that I am a farmer, they have to put “Farmer”. If I say that I am a prophet, they must put “Prophet”. When I said for example, I was born and this and that, I am a prophet and so on. He said: “No, say something else.” I said: “Well, put what you want.” He asked for my ID card. And then he took ID card and he wrote “Preacher”. And he asked me: “preacher in which church?”. He insisted. He wrote “preacher” without my consent. Now, it was when I said I would sign, it was in that moment that I obliged him to write: “prophet”. In that moment, I obliged him to replace some words. That’s not good at all. That’s not serious.  They want to condemn me. By all means!  The caricatures they have, I also have caricatures but I don’t see myself suing someone for some caricatures. the Bible does not tell me to do that. So, you see? That’s what is going on. They want to condemn me by all means. They take me to this place, they take me to that place; I am here with criminals. But, I don’t complain for this because Jesus himself endured the same thing. But at least, let them be honest. Wanting to condemn the person by all means. That is not good. In this case, you don’t do any questioning and you stick the crime you want on my back. That’s it. The caricatures they have on me, I did not give them because it is in another spirit that they are doing things. He told me for example that for the report I had to sign, it is written that I can be assisted by a lawyer, a friend or a relative. But he did not tell me. He only told me about the lawyer. There is no lawyer.  While it’s also written “by a friend, a relative.” And Koné entered the room but he sent him out. That’s not serious. I [personally] think that it is the Ivory Coast that is behind this. You accuse me of facts… He said that the fact that I say that woman must not preach, that’s inciting people to religious hatred against women. There are many churches which say women must not preach. In the catholic church, do they have female priests? But why, when it is me, I have to be condemned for saying that? That’s not fair. On every level, when we see all they have been doing so far, when we see everything that is going on, this is an open plot. Nobody is allowed to speak to me. I am cut from everything. It’s because I have been sent here, In Plateau, in the “violon” that you are here. Otherwise, there, no one was allowed… A guard would stand behind me when I was taking the lunch. I asked him for a pen, he replied that I was not allowed to take notes. I said: “But, if the lawyer was here, wouldn’t he be allowed to take notes?”. He said: “Well he is the lawyer”. But why can’t I take some notes? The friend or relative who would assist me wouldn’t be allowed to take notes ?  It is really terrible. I think this is really terrible. I don’t understand. They told me some names. They mentioned Makosso Camille, they mentioned Kassi d’Azito. They mentioned Jeanne Monney. She gave the caricatures. And they mentioned a woman named Sara, prophetess Sara. Well, I asked whether she was Ghanaian because I know Mamy Sara but if there is another Sara, I don’t know.  They mentioned some other names that I do not know. All those people united and they are the ones behind this. While he was questioning me, he asked whether I had a proof that shows that I am a servant of God. I asked him: “What proof?” And he said: “a pastor’s card”. I said: “Who should deliver me this card?” And he said: “Makosso”.  I said: “But, is Makosso the one who should deliver me a pastor’s card? is Makosso the one who should deliver me a pastor’s card? That’s not good. All they are doing is not good. Since Friday, they took me and sent me the national intelligence services. I was there. From the national intelligence services, they called me, they took me, they sent me to the cyber crime police. From the cyber crime police, they took me and brought me here, in the “violon”, at the police headquarters. And from here, they say now that they will send me to the Attorney’s Office. I don’t really know the end of this but maybe this is the will of God. But Ivory Coast has failed. That’s what I keep in mind. Ivory Coast has indulged into manipulations; people who made that today Gbagbo is far away, those same people are manipulating some other people. When the senior officer came in the office; when the senior officer read those stuffs, he got angry. He was not happy. The senior officer himself could see that it was not a good spirit that the officer did the questioning. The senior officer replaced him. You see? It’s not good. It’s not good.

All the noises you hear around are the noises made by prisoners and by the gates of the prison.  Now, while waiting for what is to come next, I request that from time to time, they will let me out of the basement where I am so I can breathe some fresh air for at least two hours. You see? The guards gave me a mat but I can’t sleep because of the suffocating air in here. It’s really difficult. That’s a bit it. But, well… that’s it. That’s it. That’s it.