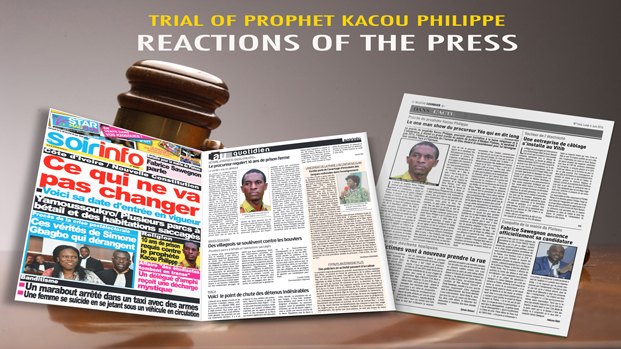 REACTIONS OF THE PRESS 1/2 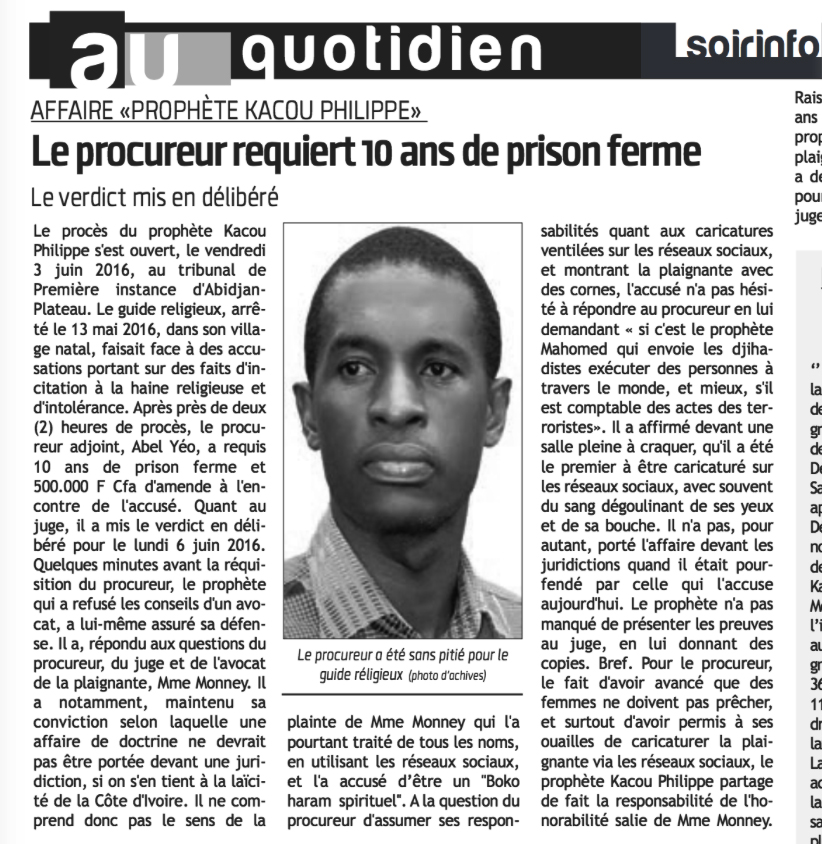 REACTIONS OF THE PRESS 2/2 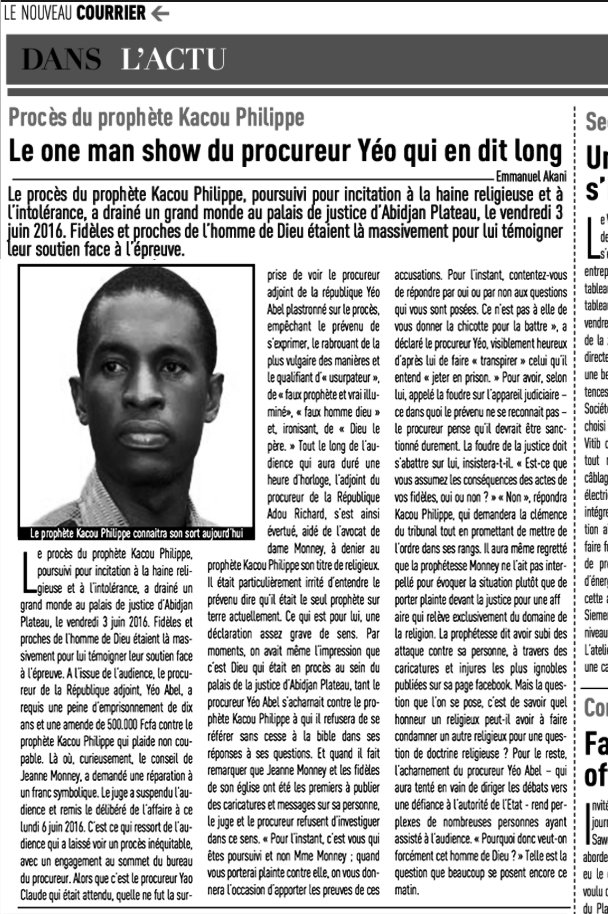 Prophet Kacou Philippe was arrested by the national intelligence services of Ivory Coast on Friday, May 13, 2016.

Behind this arrest: the evangelical churches of Ivory Coast. Instead of organising a TV debate or a confrontation. A purely religious matter is taken to court. And the Prophet is accused of : challenging the public authority, of incitement to religious hatred and religious radicalism.

He spent 5 days at the brigade of the intelligence services. From there, he was transferred to the DITT ( cyber crime police), another branch of the police. After the questionings, in the night of May 18th, 2016, he was transferred to the basement of the headquarters of the police in Plateau where he spends the most difficult nights of his life with the arrival of hundreds of people who had been rounded up by the police.

On Friday May 20th, 2016, he is transferred to the prosecutor's office. From there, he is placed under a detention warrant and transferred to the MACA, the largest prison of Abidjan with one charge : "incitement to religious hatred". On Friday, June 3rd, he appears before the court of first instance of Abidjan.

In addition to the judge and the prosecutor of the Republic, the churches had two lawyers (One on Friday and another one on Monday). The prophet was alone, with no lawyer.  For more than one hour, they unsuccessfully tried to corner Prophet Kacou. At the end of the trial, Prosecutor Yéo requested a 10-year-in-jail sentence because the Prophet says he is the only true Prophet on earth and a woman must not preach in a church. “How does that bother so long as he does not oblige anyone to believe that?” the crowd wonders.

At the announcement of the 10 year-sentence, some members of the evangelical churches were dancing in front of the tribunal, insulting the Prophet who was handcuffed. Even muslims were astonished.

At least, they all agree that Prophet Kacou Philippe himself did nothing wrong but it is because of his believers who supposedly made some caricatures on the internet in reply to a woman who called Prophet Kacou a “spiritual Boko Haram”. But the judge, yet a muslim himself, took the verdict under deliberation for Monday, June 6th, 2016

On Monday, June 6th, the Prophet is condemned to 1 year in prison and 5 years of deprivation of his rights. But one question still remains unanswered: “What did he do?”. Nothing. Let's note that the Message of Prophet Kacou Philippe has more than 20 churches in some countries like Congo Kinshasa and Angola. More that 10 churches in Cameroon, Gabon, Brazil...

Prophet Kacou informed human rights organisations and all those who were supposed to have a heart for truth, but nothing was done. No religious people. For a doctrine issue, Ivory Coast, which calls itself a secular country, should simply say: “As there is no fight and it is a mere issue around: “Woman must preach”, “Woman must not preach”, go and and sort it out peacefully.” Secular Ivory Coast should say: “You can organise a TV debate and we will see who is right. It’s not a court issue. Even though his believers did not behave correctly, did you tell him about it and he did not listen to you?”. If my son makes my neighbour’s wall dirty, is it at the tribunal, with handcuffs around my wrists that I should be informed of what my son has done? It was with handcuffs around his wrists that Prophet Kacou Philippe learned that his believers supposedly insulted some Christians on the internet and he deserves 10 to years in jail. The Master Jesus-Christ Himself was called “Beelzebub” but he did not call Roman soldiers.

And for the trial, the tribunal chose the great prosecutor Yéo himself. Before the trial started, they ordered that every mobile phone should be switched off.  And the judge, and the prosecutor, and the lawyer lashed out at the Prophet. And he was asked not to use verses from the Bible because he was in court and not at church. He barely had the floor.

From the national intelligence to the tribunal, through the DITT (cyber crime police), it was the same. At the DITT, he did not have the right to be assisted by someone while the police report allowed him to assisted by a lawyer, a relative or a friend. The prophet said: “They sent out Mr. Koné who was there to assist me as a friend. I was not allowed to have a pen. I was told that it was in keeping with the criminal procedure code.”