LETTER OF PROPHET KACOU PHILIPPE FROM HIS PRISON 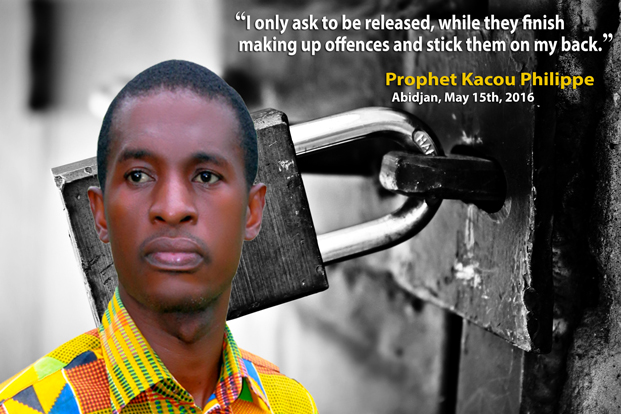 Abidjan, on the Sunday of Pentecost 2016.

LETTER OF PROPHET KACOU PHILIPPE FROM HIS PRISON.

For information, on Friday, May 13, 2016, I was at my residence in Katadji, when some officers of the national intelligence services arrived. And they took me with them. Upon my arrival here in the offices of the national intelligence services, the first word of the muslim officer in charge of the case was: “Can you see how the State showed its superiority over the Church?” I said: “How?”. He said: “We went and took you there.” I gave them all the information they asked me. Even my telephone is with them. I do not reproach myself anything.

For several days, I have been detained here in the offices of the national intelligence services. I do not have the right to speak on the telephone to my little girl who is sick and who does not see her dad. And in front of me, a Muslim officer who does not know anything of the Bible, and for whom I must say “yes, yes, yes” to all the questions he asks me, and then, put my fingerprints and signature everywhere. And when I refuse to submit my fingerprints, it is in the following day that they call me again. And when I ask to understand, it is put off for the next day. But in all this, what have I done wrong? They tell me: “Nothing”. “Does anybody reproach me something?” They tell me: “No.” But what am I doing here for several days? I do not know.

On Friday night, I was getting some fresh air in the yard of the prison when the person in charge of the archives arrived. He approached me and greeted me nicely and I answered. Then, he went to ask a guard who I was. When the guard said: “Kacou Philippe”, he ordered that I should be locked up in a “black box”. That was done. At 3 a.m. I wanted to go to the toilets, I called the guard, but he told me that I had to wait until the one who gave the order to put to me in there left the office. And I waited. And it was when he left the offices of the national intelligence services that he opened me the door. I said: “But what did I do wrong?” They tell me: “Nothing”.

Yesterday, I saw a newspaper about me in the hands one of the officers, and I asked him what he was doing with it. He answered that the director asked for it. I understood that it is only now that the elements of the charge were being sought for. I said: “What is written in it?” He said that one element in the newspaper interested them. When the officer was writing his report, he asked for my profession. I said: “Choose what suits you, between farmer and prophet.” He chose farmer. So, he should [normally] not be asking me religious questions.

I only ask to be released, while they finish making up offences and stick them on my back. Grant it to me. It is my right. If not, I request to be transferred to the MACA (The highest prison and correction home of Ivory Coast), where I can receive visits. I am told that my release depends on the high ranking officials; however, it is only now that they are seeking the elements of the charges against me. When will I be released? And I, a man of God, while I should be at church this Sunday morning, I am locked up here for no reason. This is therefore the difficult situation that I am going through, and it is normal to let everyone know about it. Thank you.