PROPHET KACOU PHILIPPE : HIS PLEA FOR THE TRIAL ON JUNE 3rd, 2016 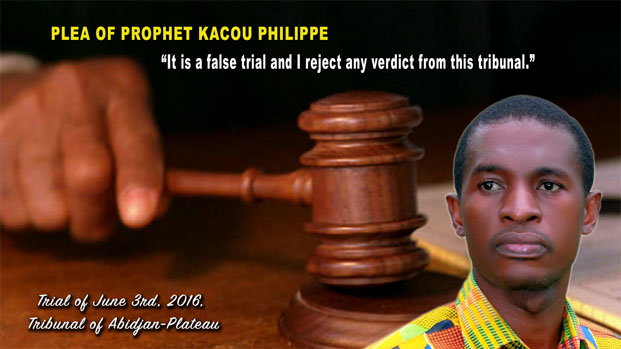 Your Honor, after I stayed down in 6th grade, I got expelled in 9th grade, in 1988. In April 1993, while I was serving as a worker on a construction field, I received a series of supernatural visions that showed me that a time would come when I would be preaching what I do not know and men of all the races of the earth would believe in that. It’s because of this mission that I am in prison.

Your Honor, I preached my Message from 2002 to 2014 in 124 sermons, which Edilivre, a French publisher published for free. The Message is in French, English, Spanish, Portuguese, Swahili and in Tamil. It is spread by every means of communication (Radio, television, flyers, public sermons…). There was a time when a Spanish speaking man named Orlando Azaria made some caricatures of me, then a person named Smalto and this became general. But, even if the minister of Justice is one of my believers, I cannot take this matter to court because it is a purely religious matter. When my daughters tell me about how they are mocked by their friends at school, I tell them: “They make caricatures of everyone, even the presidents, Muhammad and the pope. Overcome that. All your life, it will be thus.” My believers organised a response around 2014. From that moment, all those who attack me became the target. That’s all. It’s in this sense that some lady named Monney that I do not know invited herself in this religious battle, calling me a false prophet and spiritual Boko Haram because I said women must not preach.

Today, those people, such as that lady Monney, deleted all of the posts they made against me and went to file a complaint. They can never say, before God, that they never attacked me, calling me a false prophet. It’s a matter of doctrines which has nothing to do with a tribunal.

Justice must not act this way, putting me in prison in an abusive way. This act is extremely unjust. This is a religious persecution and an infringement of my freedom of expression. This is why I call this a false and unjustified trial. It is unworthy of Ivory Coast. This is why I call this trial false and unjustified. I am guilty of nothing. I am going to answer the questions for politeness sake but it is a false trial. Whether I am indicted or released, I reject any verdict of the tribunal and I request that the international community be notified of this false trial. In 325, when the church was battling, Emperor Constantine did not request the Council of Nicaea to put anyone in prison. This is a shameful trial and I am in prison because there is no human rights in Ivory Coast. From my abduction without warrant and my detention by the national intelligence services till now, the State has been trying to transform a purely religious matter into a civil case for other reasons. During the questionings, the State does not know when I am a religious man and when I am an Ivorian citizen.

Your Honor, at the cyber-crime police with some officer named Dezaï, I clearly realised that it was a plot. I saw my custodial sentence document already bearing a signature during the questioning. On the police report, I saw that I could be assisted by a lawyer, a relative or a friend and yet, he sent M. Koné Fakourou out, a friend who wanted to assist me. And during the questioning, I could witness such a dishonesty that I never saw before. Apart from Lieutenant Ouattara of the national intelligence services, not only one of them did not refrain from mixing his job with his religious beliefs.

And when I asked why I was arrested, they replied that it was not me but my believers made some caricatures on the internet. I said: who are my accusers? They said the public authority. I said: Alright but does the law say that you can punish someone for somebody else’s fault? They did not reply. Your Honor, the Bible, on which you took the oath, says the contrary in Ezechiel 18:20. It was argued that I was the one who taught that to my believers. I said: “Alright but was it the Lord Jesus-Christ who taught Peter to cut Malchus’ ear?”. And all this, they did not write it on the report. They rather told me: “We are getting to that point.”

After that, I should be taken to a police district called “8è arrondissement” but when they heard that some people, arrested overnight for a routine check, were headed to the police headquarters, that man Dezaï himself took me to the police headquarters where I suffered terribly for two days. A woman who had asthma even passed out because of the high temperature of the place; they took 187 people out of the prison cell except me.  And when we arrived at the prosecutor’s office on May 20th, 2016 morning, I was told that a prosecutor would hear me to see whether I should be sent to prison or be released. But I was taken straight to prison without any hearing. I was only made to sign a paper which I did not read. Once in prison, I was surprised to hear that I am in prison because I would have prophesied the fall of the current government. And everyone believed this lie, even prison guards. Some others argue that it is because I spoke against Muhammad and Islam.

Your Honor , I received two pieces of information. The first is that I am in prison because of many Christian and Muslim religious leaders. This information was confirmed by the secretary of the protestant and evangelical commission of Ivory Coast (in newspapers, videos and phone calls). Several amongst them confirmed the facts.

The second information is that, at the request of the pro-Gbagbo evangelical churches, the State must sacrifice me and in return, they will give their support to the current government. And this because of my Message which disturbs the world. I who never interfered in politics, I am the one who should be sacrificed for the government and the pro-Gbagbo evangelical churches to reconcile?

I heard that I should be condemned to a long sentence and then I should be transferred to prison very far from Abidjan to be isolated. And a pastor would have said: “He disturbs us. If possible, send him to the Hague so we can work in peace.” Alright but can you have someone imprisoned in the name of Jesus-Christ and pray and pray which God?

Your Honor, none of all the pastors of Ivory Coast ever spoke to me. If they think that they are Christians, what do they think of Mat.18:15 which says that if you have something against your brother, do not go to courts (1 Co. 6: 1-4) but go to him? They never tried to speak to me. It is rather I who speak to them first. All they wrote against me on the internet, they deleted it but it will always be engraved on the wall of God in Heaven till the day of the judgement. And for political reasons, the government applied directly their wish, putting me in prison without even trying to know who made the caricatures and why, and without asking me to get things in order with my believers. This trial is absurd and unjust. It is a false trial and I reject any verdict from this tribunal and I appeal to the international community. This trial makes no sense. It is not legitimate. If a football player insults another football player on a football pitch, can that be taken to court? Only another reason can justify such sufferings and this false trial against me.

Your Honor, apart from this, concerning everything I have preached and which is contained in my book, such as the fact that all the religious denominations are from the devil or women must not preach, I will support it till my death. And if it’s for this that I have so suffered, I say: “Amen”, because I am a prophet like the prophets of the Bible and prison is the baptism and the cup of great prophets. This must happen but woe to those by whom this happens.

Your Honor, when I saw that I was accused of challenging the public authority, inciting religious hatred and of religious radicalism, I wondered, for what other charge would the Lord Jesus Christ be crucified if he came back on earth today?

Your Honor, I am fully convinced that the reason for my imprisonment is obligatorily otherwise. Some religious people who preach everyday against witches and fetish priests, why can’t we preach against them too? Have the fetish priests ever taken them to court?

Your Honor, everything I preached since July 8th, 2002 and which is contained in my book, it is in the virtue of the divine mission that I received on April 24th, 1993 that I preached it. And till my death, I will never accept that some losers will transform the Bible into a trade item and the poor souls into clients. It is my mission and I have never obliged anyone to accept it. A Christian or a Muslim cannot condemn me for this because it is the path of the prophets and there hasn’t been a prophet who did not say that. But contrarily to Muhammad, I did not take the sword and start a holy war. South Africa never imprisoned Ahmed Deedat.

For me, all these sufferings from my abduction, my detention by the police of the national intelligence services where I slept five nights in a chair, the pressures from the cyber-crime police, the nights in the basement of the police headquarters, the prosecutor’s office and now the largest prison of Abidjan, it’s history repeating itself but I have already forgiven you. In my prison cell, I asked myself a thousand questions. Has God become Satan and now it’s Abel who persecutes Cain? And is it the disciples of Jesus who deliver the Pharisees to courts and Roman soldiers? And if my book incited religious hatred, why would Edilivre, the greatest publisher of France, publish it in 2014 and the “Librairie de France” sell it in Ivory Coast? You see? But as for me, I will not harm anyone. And I was a little boy, playing in the dust, I said to my parents that, till my death, I would never harm anyone, I would never fight with anyone and I would never take anyone to police and it is not now that I am a Christian that I will do it.  Thank you and thanks to the secular State that imprisons the prophets of God.

Note: I ask that copies of this be given to the press and every institution of law.

From myself, Prophet Kacou Philippe, from my cell of the MACA, the largest prison of Abidjan, May 29, 2016.